Being born on the African continent as a European citizen is perhaps what has made Olga so open-minded and respectful towards different cultures. With a clear mission in her mind, she continues to learn and spread the message of respect and understanding towards the immigrants.

After finishing her studies about special education, Olga started working in the social field. In particular, she took care of people with disabilities such as autism. Right now, she is working as an intern in the organization Movilidad Humana and would like to continue her previous work afterwards. She knows that by helping people, her life becomes fulfilled.

‘I was born in Melilla, North Africa and my husband comes from Ferrol. Living and interacting with many cultures is a normal thing for me- I am used to Islamic, Jewish, Hindu and Christian cultures which are all present on the northern coast. We all live together and respect each other, celebrating various festivals and religions. There is no place for fights nor conflicts’.

Olga believes that many Spanish people are afraid of immigrants taking away the jobs, forgetting that usually those who escape from their country are simply looking for a better and safer life.

‘People who want to enter Melilla or Ceuta arrive from other African countries after a very hard and long journey from their country of origin. They come desperate. And when they cannot enter, sometimes they get aggressive and try to enter at any costs. This of course is not good but somehow understable. The police officers are doing their job. Governments and politicians should act differently though.

I have no foreign friends here, only used to know a French girl once. Perhaps everyone feels better in their group, more comfortable and protected. In Ferrol there are not many events where you could meet people, there is not much movement. There is not enough promotion from the part of the city council. Maybe this could be improved?’.

Olga’s family lives in Andalusia. She herself believes that there is a lot of racism due to the agricultural character of that part of Spain. In her opinion, employers may not be interested in hiring a Spaniard because of the fact they have to pay for the insurance etc. It is easier for them to hire an immigrant, not give him any papers and pay in black.

‘Instead of attacking those kinds of business practices of those who command, people attack the immigrants. Although they are working for very little money and they also take a part of this money to send to their family, to their country’.

Olga notices racism between Spanish people from different regions. It is a result of lack of understanding of different ways of acting.

‘In Galicia such opinion is not common, but from Madrid to the north people think that the Andalusians do not work, they are all day smiling, partying or lying down, sleeping. But it is not like that. We work differently, with joy, with laughter, making jokes. On the other hand, we think that the people of Madrid and the north are very serious’.

She also mentions that sometimes she is too straightforward for the Galician standards.

‘We, the Andalusians, say things and it seems that we are serious, but we are not. And here many times I have said some joke and someone has taken it seriously, not understanding the sarcasm or not understanding what I meant- I have had to explain it later. You have to measure the words a lot’.

The most important thing in my life is health. Because if you are healthy, you can do whatever you want. 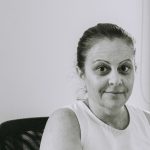