Having spent the last few years in Europe, Sarath has got a deep insight into the Western culture, so different from the one that he grew up in. Even though he loves the deep relationships between people, strong family bonds and kindness of the people in India, he also appreciates some of the aspects of the Western lifestyle, such as the independence of the individual, care about the physical health and the tranquility of life.

Sarath graduated in mechanical engineering in his home country- India. He wanted to pursue his studies abroad so the moment he found out about getting accepted to his Master course in France and Germany, he immediately agreed to come to Europe.

‘Although I did not know the language, I chose France. After two years of studying at Master level, once again I applied for the PhD in Europe- this time in Spain. Without doing any research at all, I simply agreed to come to A Coruna and Ferrol. I guess I just thought it would be fun!’.

Studying in India cannot compare to studying in Europe. Sarath admits that back in his home country he did not have a single pause during the four years of intense university life. Despite his commitment, he started college without any clear idea nor a vision for the future. Sarath always kept on improvising and going with the flow.

‘I come from the South of India, Kerala. Every summer I visit my family who still lives there. They would love to come to see Europe one day, but honestly I cannot imagine what a cultural shock would it be for them! India is the only place they have ever been to. For more than 50 years, my parents have lived according to certain values, ideas and prejudices. My younger sister is 25 years old, is married and has a child. In India, 90% of marriages are arranged’.

There is a matrimonial website, similar to ‘Tinder’ of India which instead of young people, engages mostly their parents. The parents look for a person to marry for their child according to the necessary data such as: horoscope, skin colour, caste, religion, appearance etc. For Sarath, this phenomenon may be the evidence of hidden racism.

‘People from North of India are whiter than those from the south. Society thinks that if you are more white you are more valuable. We have commercials of specifics that make your skin whiter. So if you grow up in a society like that, it is really hard for you to take it out of your head. The marriage of my sister was also arranged and she was really worried about her horoscope, according to which she should get married early. My sister didn’t know anything about these things. I was supporting her but she was scared inside. I think it has to be changed. We live in the 21st century and there is still the mindset that women have to stay in the house instead of choosing her path. It’s absurd’.

India differs a lot from the European countries. For instance, both parents hold a very strong position in the society. Even when ‘children’ grow up, get married and find a job, they are still supposed to share the same house with their parents (until they die). Because there is no social/security funding once they are retired, parents are completely dependent on their children. Sarath admits he always had to deal with a lot of pressure related to marriage and reply to countless questions from the part of his family. Nevertheless, there are still many positive aspects which could be taken over from the Indian culture.

‘I think that in India there is much more humanity left in people. By humanity I mean the kindness, the way the people understand you, the way they want to help you. It’s much more present in India than here. There are many more people who want to be with the others and get to know the others. The Western society is much more independent, you want to be alone, in your own way. The society in India is more dependent. An average middle class house normally has somebody to cook for you. Here it is seen as a very posh thing. But there- it is healthy. There are a lot of people so not everybody can have a big, dream job and stay independent. There are some people who work at your house, who you respect and you distribute the money like that. For me this is something which is not really bad’.

With his open-minded attitude, Sarath rarely had any problems with connecting to the place or people he stayed in. What he likes the most about Ferrol is the possibility of getting to know everyone in the small city.

‘I still have 2 more years here and a research stay in Germany for 5 months. My initial plan was to go back to India after a couple of years. Right now though, I have no idea. There are many cultural differences and I keep on changing every year. In general I wanted to go back to India and perhaps teach children about the importance of sports. Because in India sports are seen like something not necessary. We don’t care about our body at all. We just live with that and that’s it. And actually, you have only one body’.

After a couple of years spent in Europe, Sarath admits that his motivation is much different from what it used to be. Back in India, he really wanted to succeed with his studies as well as his further career, fame and money. Right now, the ‘no pasa nada’ attitude has switched his priorities to rather staying calm and simply being happy.

‘I don’t really find myself driving for attention or money. I wanna live my life and enjoy it. Sometimes however it is also depressing. All around the world people think that you need to push yourself to achieve success. And when you change your mind – you are living good, you are nice, you have enough money to maintain yourself, you are living the moment. But then you see all the people around you on Instagram which show you that success is meant to be another thing and sometimes… it is depressing.

I think many people can relate to this, especially young ones. C’est la vie. You cannot work all the time. You work a bit and then have a rest’.

What is the most important thing in your life?

I don’t know what is important and what is not important. Even the small things are important to me. Perhaps the most important thing would be love? It gives happiness. 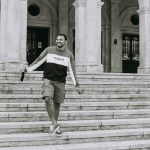 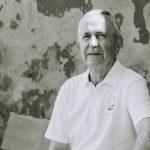